How Digitalization has changed the face of Indian Economy in 2020 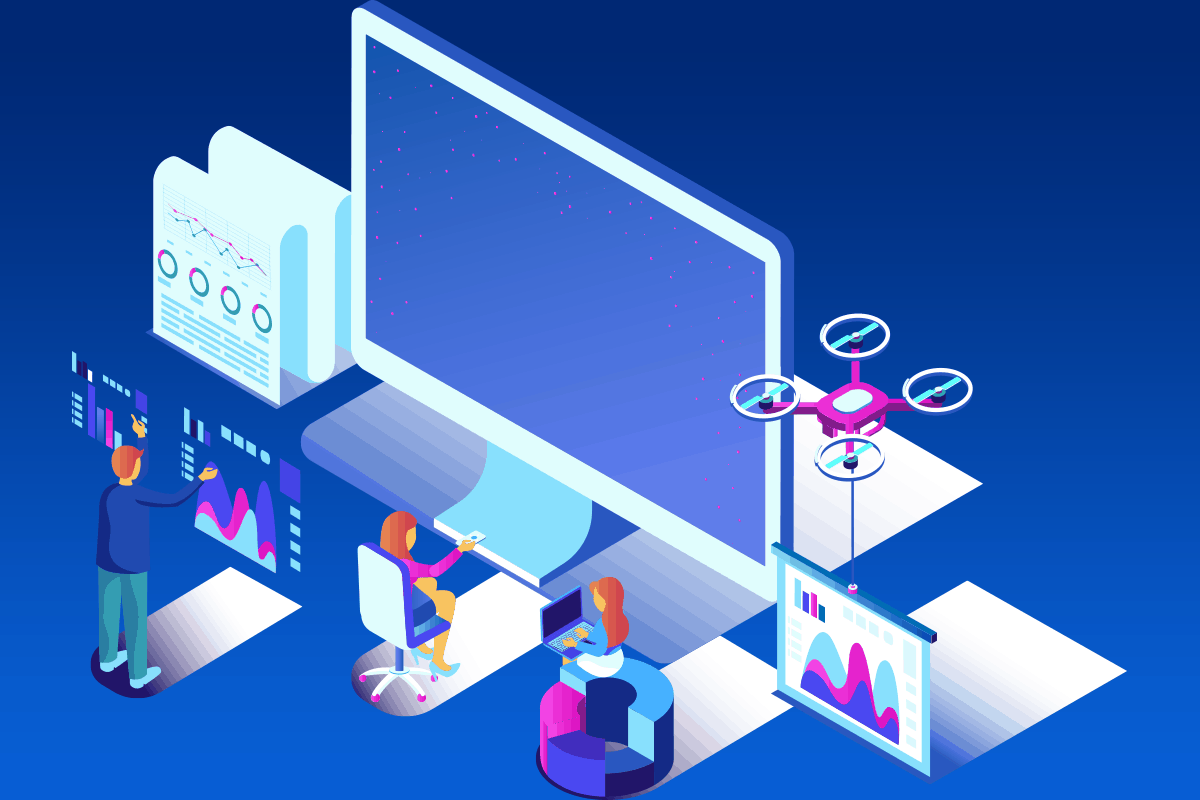 How the Digital Economy has flourished for years:

The number of words you can make in combination with the word Digital has only increased in last one year.

And it is quite understandable, we have had initiatives like Digital India, Digitalisation, Digitisation, Digital world etc impacting our day to day life.

Digitisation is more related to converting all our data into bits format and Digitalisation is the use of different technology/methods to change business processes.

Though there is a subtle difference between the two, the two words are used interchangeably by all of us meaning the use of Digital Methods to improve our business processes.

Undoubtedly, the incumbent govt has taken great initiatives like Digital India under the leadership of Mr. Modi. 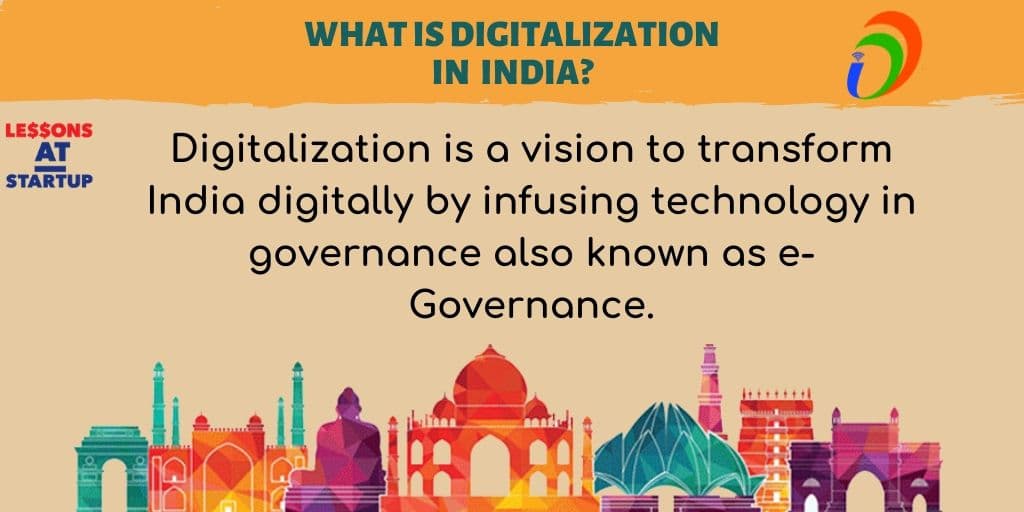 Digital India is an initiative by govt of India to help the country adopt digital initiatives. Initiatives which are expected to cut dependency on bureaucratic processes, decrease corruption and help cut down time in taking public services to the citizens of the country.

The impact of Digital India on India’s economic growth is supposed to be long-lasting. As the initiatives in the Digital India Scheme are all driven by technology.

Some of the key Initiatives of Digital India were:

and a few other initiatives were taken to grow the country with the help of latest technology.

The impact of Digital India was expected to :

Our governments for years have worked towards creating an economy which is more reliant on the internet and less on the paper-based economy. The incumbent govt provided a single name “Digital India” to all the digitization, digitalisation and other initiatives taken by govt to have a positive impact on our economy. 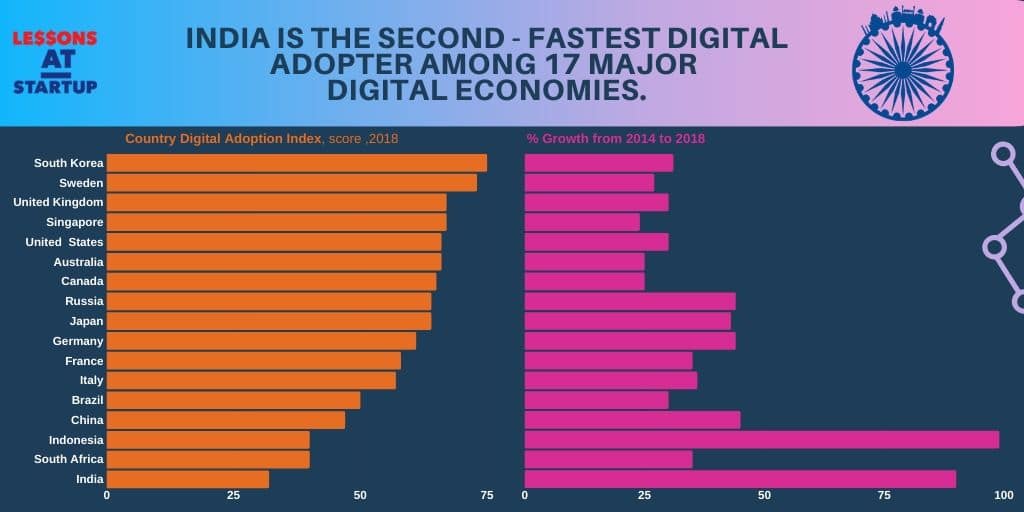 We have unknowingly been a part of Digitisation for last so many years.

We have all been a part of the Digital World where we have touched the Digitalised business processes by using in our day to day’s life. Think of activities such as making railway reservation online, buying Air tickets, bus tickets online or making payments by credit card, debit card, etc.

For years, promoting Digitalisation has been a Governmental initiative to give all services to every citizen on their web portals or electronically, to make the transactions transparent and smooth.

The real changes because of Digitalisation are becoming visible today because of the push by govt., which is expected to usher in a new era (like how computerisation did in public as well as private sector almost two decades back). Things like paper currency notes will soon be a thing of past.

Slowly we are moving towards Digitalisation of Indian Economy with new steps and initiatives.

There are certain factors which compel us to follow Digitalisation in our routine life.

On the contemporary, we need certain essential elements to materialise Digitalisation in our routine life.

Why Digitization is the need of the hour:

Corruption today is the biggest problem in developing countries. In fact, corruption is a problem we have faced for ages.

It is said, a parallel economy flourishes side by side to our main economy. This economy is run by those who avoid paying taxes to the Govt.

One of the prominent reason for the parallel economy is the dependency on cash-based businesses.

The culprits running the parallel economy do not feel like having bank accounts and other business books which simply means no tax payment to Govt.

With Digitalisation Initiatives like Taxation being bought online and steps like Demonetisation, the govt is trying to weed out corruption from our system which is expected to lead to a positive impact on Indian Economy.

Role of Digitalisation in Banking Sector in India: 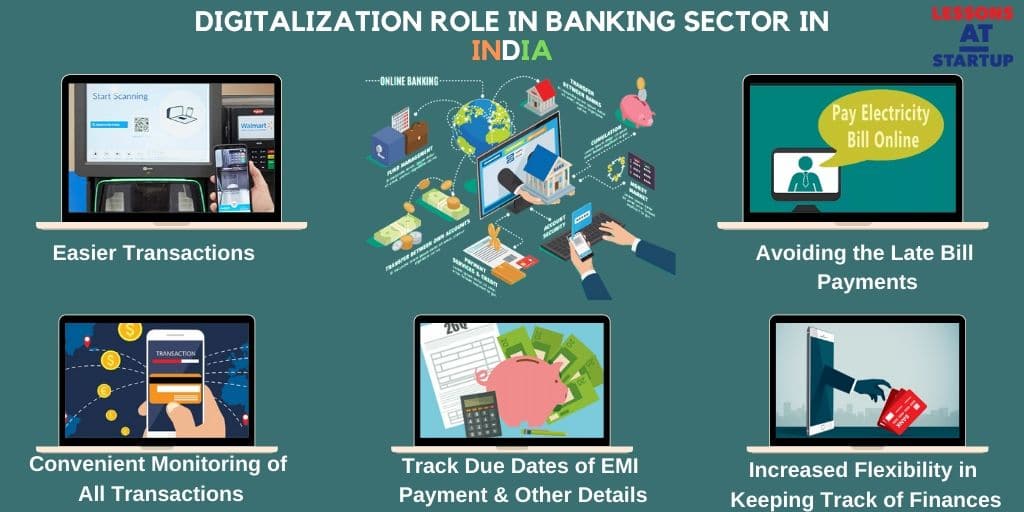 With digital transactions, one needs to have a proper bank account and essential documents. Banks are the part and parcel of our day-to-day life.  Banking includes ATM transactions, online payments, and transfers.

Because of Digitalisation of their processes, banks have saved costs by improving their processes. Customers have been able to avail benefits such as ATMs, cashless transactions using Credit Card, Debit Cards, etc.

For example, earlier it was impossible for anyone to get an unsecured business loan because of the high risk involved and documentation required to provide the same.

Fast forward today, Government is pushing schemes like Mudra under which Startups can get startup business loan without collateral. It is only because of Digitalisation that banks have been able to give benefits of schemes like this to startups in India.

This has given a boost to initiatives like startup India, Mudra, etc.

Today, banks are going out of the way to adopt the latest technologies to enhance customer experience. Another marvellous example of digitalisation is mobile banking where banking can be done on mobile phones.

The feature allows you to literally use your bank account from your mobile phone.

Digitalisation in Banks has not only reduces human errors and save time but has led to cashless transactions which have reduced the circulation of fake currency in the market. Thereby, leading to a positive impact on our economy.

2016 is the year which will be always linked to demonetisation for the withdrawal high amount denomination Rs. 500 and Rs. 1000 of India’s currency in circulation on November 8.

After Demonetisation was announced, cashless payments in October 2016 increased 22%, when compared to October 2015, indicating that Indians have been progressively more accepting of different digital payments modes since 2015. 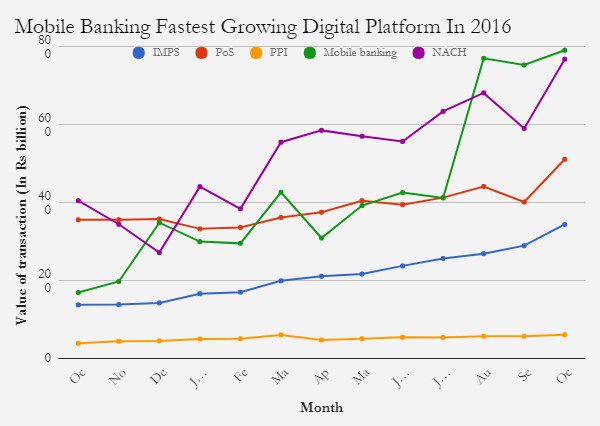 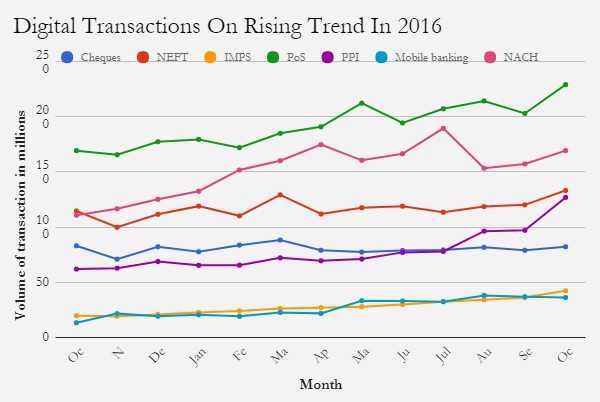 Impact of Digitalisation on Indian Economy: 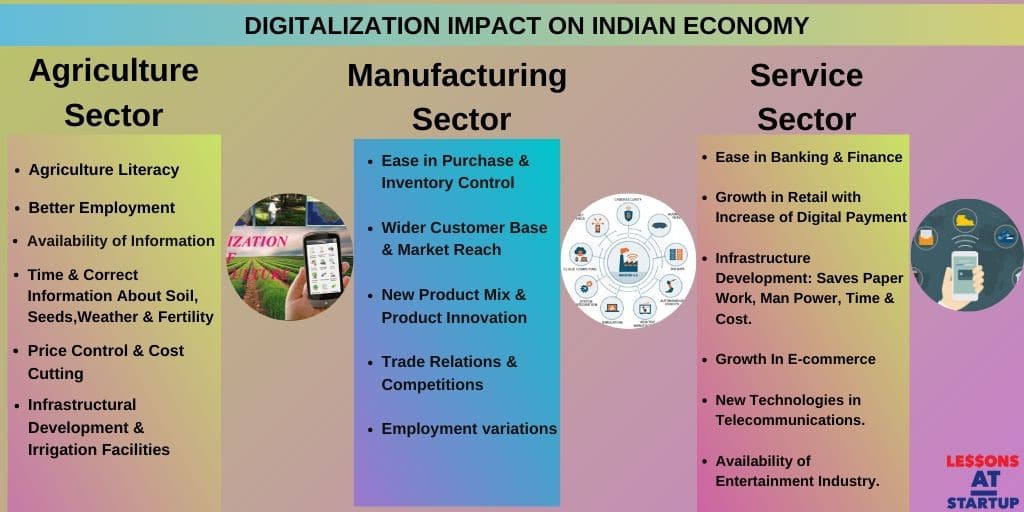 Digitalisation has played a vital role in flourishing the Indian economy. The biggest example is the job opportunities created in the country for youth.

In addition to the above, “make in India” drive has given an immense push to youngsters to start new startups and think of creative ideas to contribute to digitalisation of India.

The government on its end is pushing and encouraging the Indian public to go cashless and reduce reliance on cash transactions. The purpose is to make us adopt digital payments.

Digital transactions make us follow a legal path which is helpful to flourish the economy.

Use of plastic money gives freedom as well as security to citizens of the country because it works on technical grounds.

Digital payments will be helpful to the global world.

Let’s have a look at couples of statistics related to an impact of digitisation on the Indian economy in terms of employment, contribution to GDP in comparisons with other countries: 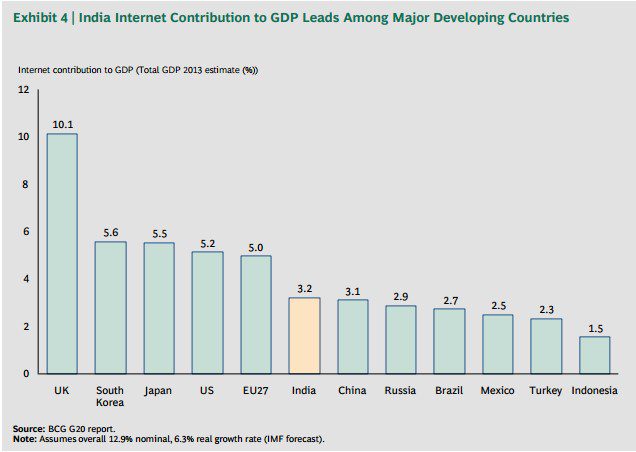 Which Are The World’s Most Cashless Countries?

Steps by the Indian Government to improve Digitalisation: 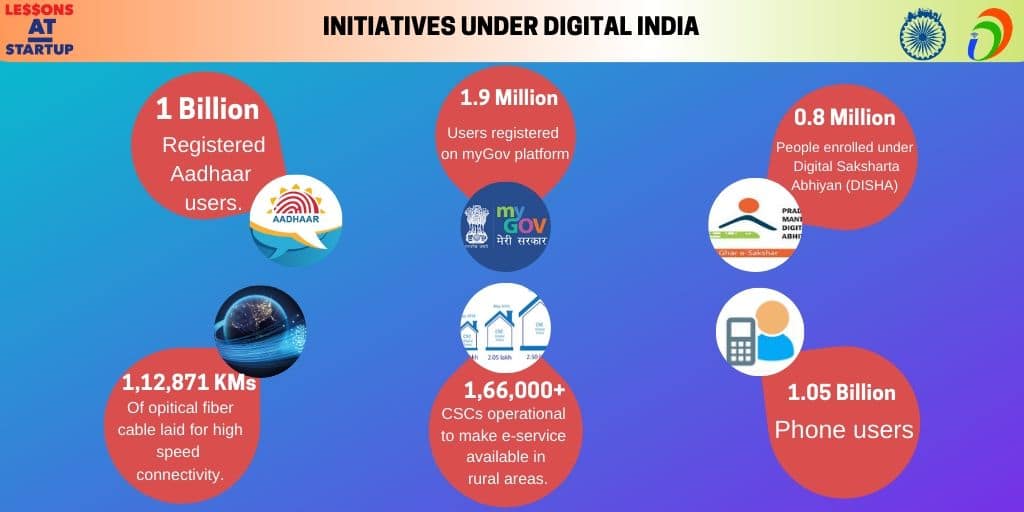 Digital infrastructure’s backbone is the availability of high-speed internet. With the introduction of better and faster mobile internet connections, the services through Digitalisation have been delivered in an efficient way to the citizens of the country.

Next important step taken by Government is the introduction of a Common Service Centre. A secure public cloud to share information (I will not vouch for its safe status but as per govt, it is safe ).

At the end of the day, Digitization is helping businesses streamline their processes by slowly taking away dependency away from paperwork.

Banks, I think are the biggest beneficiary of digitalisation. Since they now have processes where less staff can do more work.

Digital India has empowered its citizen by giving them digital power like during the journey you don’t have to carry any physical documents.

You can show a soft copy of the ticket and identity card which fulfils the purpose.

Government is pushing Digitalisation in the country by promoting e-services to every citizen.

Another initiative – Digital India is all about Promoting development and creating an opportunity for new India in terms of job, technology, and transparency through Digitalisation.

I am a firm believer in the idea of digitalisation as this is one step which will gradually turn us into an economic powerhouse by cutting down paperwork and decrease our dependency on govt employees which will help cut down corruption.

To see the immediate impact of digitisation, all we must do is look at how income tax filing and income tax return processes have been streamlined.

Time is not far when Digitisation will change the phase of the Indian economy.

Is Digital Marketing A Career Worth Pursuing in 2020?

Sign up to our newsletter and get awesome tips, blogs notification delivered to your mailbox

Something's wrong? Recheck the details or contact us by filling the contact form if still unable to get through

Scroll back to top
Send this to a friend